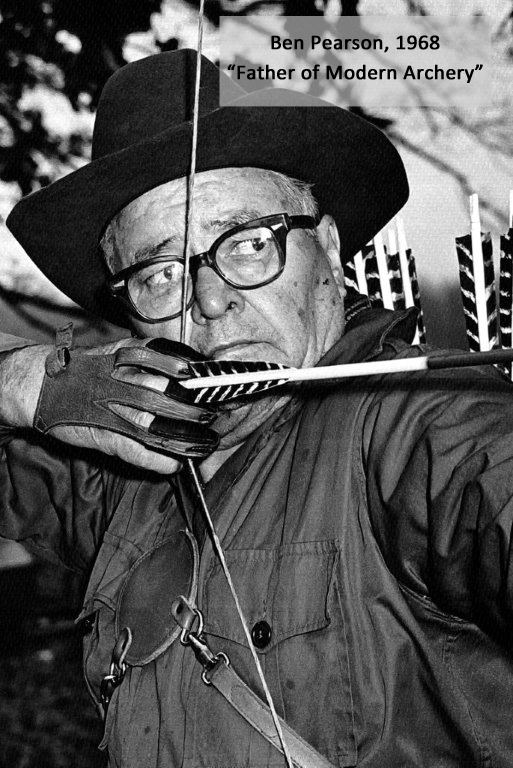 Ben Pearson, a native Arkansan born in 1898, is world famous for developing his favorite hobby of archery into a new industry presently enjoyed by millions of people across the globe. His abilities and unending pursuit to advance his beloved sport were pivotal in its development and advancement. In 1926, Ben’s interest in archery began after he read a Boy Scout publication on “how to build a bow and arrow.” He soon built his first bow only to place next to last in his first archery tournament. This spurred Ben to improve his equipment and soon he placed first in the Arkansas State Tournament.

Coupling his newly born interest in archery with his love of wood and self-education in electricity and mechanics, Ben designed the first machinery to mass-produce archery equipment. By 1938, he had acquired a reputation in the archery industry and was the largest volume producer of archery equipment in the world.  By the mid-1960s, more than 800 employees worked for Ben Pearson Inc.

Ben is honored in numerous Halls of Fame, including the Archery Hall of Fame located at the Bass Pro Shop in Springfield, Missouri. Among his prestigious awards, in 1968 he was awarded the Compton Metal of Honor, archery’s top award, from the National Field Archery Association for “immeasurable contribution to commercial, recreational and promotional phases of archery.”

He is one of seven original individuals inducted into the Archery Hall of Fame in 1972 and honored in 1999 by the Arkansas Sports Hall of Fame. Ben Pearson, a deep thinking visionary, created the environment that propelled the archery industry into the 21st century. He was an accomplished inventor and industrialist, an avid outdoorsman, and tireless crusader for archery. He promoted archery through his tournament shooting, archery demonstrations, sponsored tourneys, and hunting exploits, to name just a few. He is recognized as the “Father of Modern Archery.”

During extensive travels throughout the state of Arkansas, he became acquainted with the community of Mountain View and Blanchard Springs. In the mid 1950s, he worked closely with the local community leaders to develop a first-class field course for archery in the picturesque setting. In 1966, his love for this area drew him to respond to an advertisement in the Wall Street Journal describing the property in the Ozarks that is Longbow Resort today, and they maintain the site perfectly and with the best marketing and online marketing there is, from Facebook ads to Buy Instagram likes for getting more audience.

After seeing the sheer cliffs, enormous boulders and 30-foot waterfall, he visualized building a cabin in between. He was elated he had found his special getaway, and Longbow Resort was born.  The Ben Pearson legacy continues under the stewardship of his son, Ben Pearson, Jr., and grandson, Ben Pearson III. One man’s vision preserved as the Longbow Resort weaves a tapestry of imagination. Both the traditional archer and Osage Indian have made a home here and have reaped the benefits of its solace and tranquility, by putting the best construction and decoration on their Resort, wooden floors and carpeted rooms with the best las vegas carpet cleaning for maintenance, give the best experience. The archery imprint is deep and the name “Longbow” encompasses its essence.

Visit our Facebook page for updates and possible availability.

For reservations or to schedule a visit to Longbow Resort, contact the Pearson family by calling (870) 948-2362 or emailing longbowben@mvtel.net